Christmas almost upon us again. It almost seems if it was this time last year we was prepping for it HA HA.

Well now the evictions have quietened down, due to the 2 week amnesty, that takes place with the court bailiffs. Though our other forms of work still goes on, and we are as busy as ever. Though today we had an interesting job. One that we have not had before, which was a Local company that had just taken over a new premises. The problem being that they did not get the new keys to the parking bollards. So with the removal company needing access to the car park, and to get as close to the building as possible.. 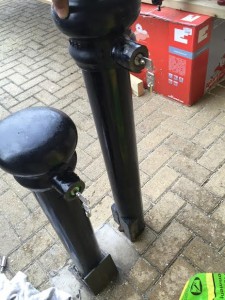 The business owner Steve asked if we were able to attend to open them ASAP. Also replace the locks so that they could continue to use the posts. As it would be likely people would park or use the car park as social gathering place. Or to avoid paying for parking.

We arrived on site at the prearranged time and met Steve. He was a really pleasant guy and and offered us a drink etc. So Steve walked us to where the posts were, and they were not was I was typically expecting. I was expecting a fold down post with a padlock. Though these were not. Theses post were about 5” in diameter and had a cap on the top. Which reminded me of like a muffin top. On the front of what I call the muffin top was a tubular extension which housed a radial cylinder. The type of lock you’d expect to find in a vending machine or a bicycle D lock. The key is effectively like a tube with 7-8 or 10 pins. You push the key in and this depressed the pins to their required height and when set the key will rotate.

So I set to work opening these locks. They were a little tricky to open but after about 15mins I had managed to rotate the plug of the first one and the lock pops out about 25mm. Now at this point I expected that the post lifted out of the ground. This wasn’t the case. All that happened was that the cap or Muffin top came off. Which then left the post with another lock the same as the other and a handle. The handle was solid so it was obviously a case of when you opened the second lock, the handle would rotate. Then the post would be pulled out of the ground. So I set to work on the second lock. Soon it was open. It popped up from its housing. A turn of the handle and sure as hell the post was free from the ground. So now I moved on to the other posts and they were opened quickly.

Now I was left with the options of making new keys which was not going to be easy. Secondly we didn’t know who else would have old sets of keys. So the safest bet was to replace all of them so old keys would be of no use. On top of that we had a solution to our customer. Rather then having multiple keys for all the posts, which would be time consuming when going through bunches to open them. So we suggested making all the locks operate on one key. Steve was impressed with the idea and said that it would be a great solution. He didn’t think it would be possible to have that many locks on one key. So as the Local Locksmith , we had the perfect solution. 24hr emergency service offered

So with that we rang our supplier who stocked them so we was able to get them and go back and re-fit the new locks to all the posts and the caps. Steve tried all the posts and was kind of excited that he could just have one key on his keys that would allow him to open all the post. With that complete, Steve asked us to look at the other locks on the premises and with that he then decided to replace them all also. He then had the whole premises put on to one key also. So now he was down to just 4 keys on his key ring. 1 for the posts. 1 for the locks to the whole premises, 1 ket to his car and finally a key to his front door at home.

So in all, an interesting day in the life of a locksmith. Just one of the many jobs that we can come up against. Not just all people locked out all the time. Steve was extremely happy with our service, and did say he had read our reviews on Checkatrade.com also.  Giving him peace of mind with regards choosing the right Locksmith, to carry out the works.