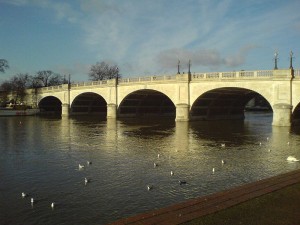 A recent article in the Richmond & Twickenham Times reported on the theft of a delivery van in Hampton Wick at around noon on Friday 10th July 2015. During the incident, the thief drove the van at it’s driver in order to make off with the vehicle.

The van was seen driving in the direction of Kingston town centre and had been taken from Hampton Wick in Old Bridge Street. A witness to the crime saw the delivery driver try to block the escape route of the culprit by jumping into the bus lane on Kingston Bridge. The 49 year old victim was then knocked down.

The witness to the crime stated … “I was stationary in light traffic heading towards Hampton Wick when I saw a man run from the pavement into the road on the other carriageway … He stood in the bus lane in the middle of the bridge, then a large van drove in my direction in the right hand lane … The man was still in the bus lane, waving his arms at the van, which then swerved into the bus lane and hit the man … I was especially shocked that the thief had gone out of his way to hit the other man – he could have just driven away in the right hand lane, but chose to swerve to hit him.”

The witness then went on to say …”I guess it was no more than 10 mph, but hard enough to lift him off his feet and onto the windscreen and bonnet …The van then swerved back into the right hand lane and drove on past me.”

The witness added he was so shocked he just sounded his car horn as the victim shouted: “It’s my van and he’s just stolen it.”

Following the incident, the delivery driver was taken to hospital and treated for minor injuries.

To date, police have made no arrests in relation to the hit-and-run theft. If you have any information that could help the police with their enquiries however, please call the non-emergency police line on 101. Alternatively you can pass on information anonymously via Crimestoppers on 0800 555 111.

If you would like any security advice for your business or home then please do not hesitate to contact us on 07921 000672.

With thanks for the use of the photo of Kingston Bridge to Stephen Parnell.